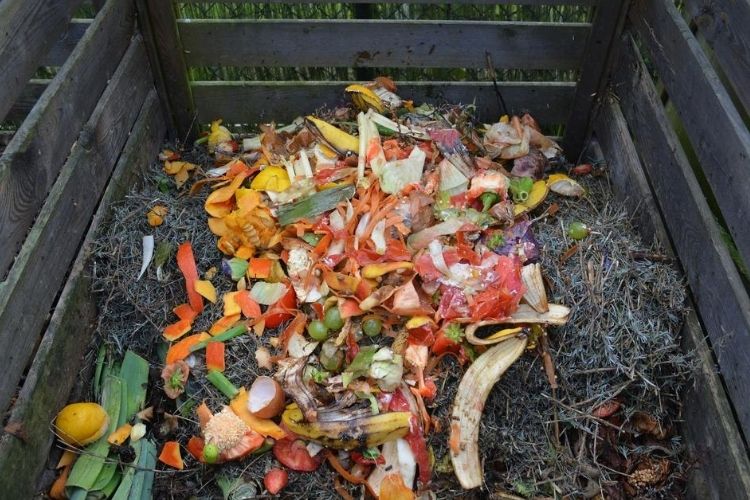 Good compost doesn’t happen by accident. The disintegrating organisms have clear requirements for the living conditions in the compost. The main requirements for an efficient composting process are an adequate supply of oxygen and nutrients, as well as optimal humidity and temperature.

The difference between compost and manure heap is in oxygen:

The microorganisms that decompose compost need oxygen to breathe. To provide oxygen access, the compost must be loose. You can ensure the compost is loose by mixing solid waste with coarser mixtures, the so-called dry mixtures, and, if necessary, mixing the compost. Oxygen in the compost can also run out if the compost gets too wet. The denser the compost, the easier it is for air to escape and it becomes a manure heap.

Compost microorganisms are mostly swimmers who can only live in water. Therefore, dryness is the worst enemy of compost. If the compost is performing poorly, it is most likely too dry. Dryness can occur from insufficient moisture or too loose compost structure. For example, whole branches or flower stalks make the compost too weak and dry out easily. While the compost should be loose, it shouldn’t be sparse.

There is a good simple rule of thumb to check the moisture content of the compost: When squeezing the compost in a fist, a few drops of water should be squeezed out of it. If the water is trickling through your fingers, the compost is too wet.

Microorganisms living in compost use the energy of organic waste to maintain their vital functions. Microorganisms need carbon compounds to generate energy, and nitrogen as building blocks for their cells. They use other nutrients as well, but the ratio of carbon to nitrogen is vital to a successful composting process.

Carbon is abundant in all organic waste. For example, autumn foliage, wood chips and twigs, straw, peat and dry grass are “poor” carbon waste.
Nitrogen, on the other hand, is usually understood as “strength.” Nitrogen is abundant in green parts of plants, such as cut grass and weeds, as well as in household waste, manure and urine. At the same time, the dead plant materials, of which chlorophyll disappeared, contains very little nitrogen.

There is rarely a lack of carbon in compost. At the same time, nitrogen is often too low, especially in garden composts. Lack of nitrogen slows down the growth of microorganisms. And then the compost does not heat up, its decomposition slows down and the end result is a nutrient-poor or “weak” soil improvement agent.

If there is too much nitrogen in the compost, the compost “burns” at a high temperature, but smells like ammonia. This is due to the fact that microorganisms waste excess nitrogen, which evaporates in the form of ammonia and overloads the atmosphere.
It is difficult to give definitive advice to achieve the optimal nutrient ratio because waste can be very different. Garden compost is usually nitrogen deficient. Household waste compost may again contain too much nitrogen. Typically large household composters often smell like ammonia if too little carbon-based dry mix is ​​used. Garden and household waste complement each other in the composter, so the best compost is obtained by mixing different waste.

The microorganisms in the compost produce heat. In Finland, heat is still very quickly released from the compost, which slows down the fermentation process.
In large compost heaps, the top layer of the heap acts as insulation and the inner layer is composted. In order to ensure sufficient heat production, the uninsulated compost must have a volume of at least one cubic meter.For smaller composters, external insulation is required on top. As a general rule, the smaller the composter, the thicker the insulation should be. In Finland, the insulation must be at least 5 centimeters thick.